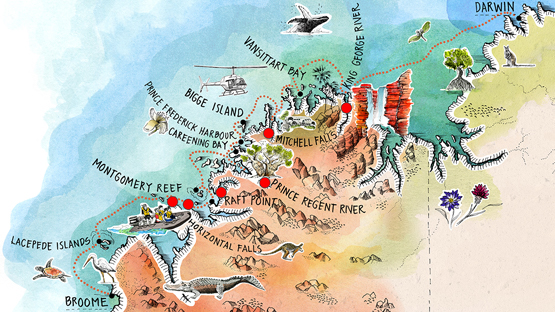 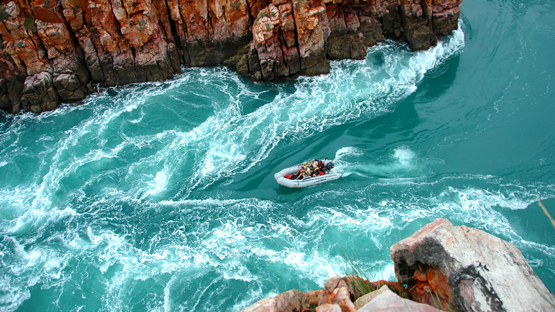 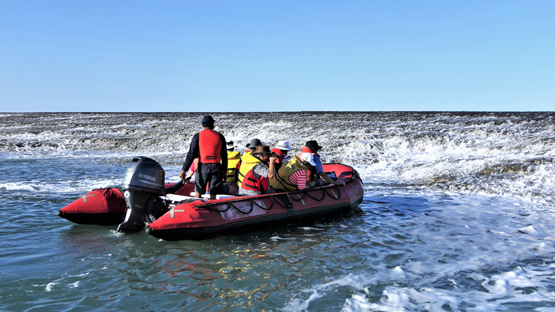 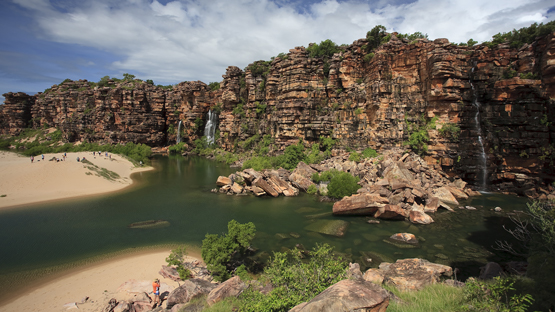 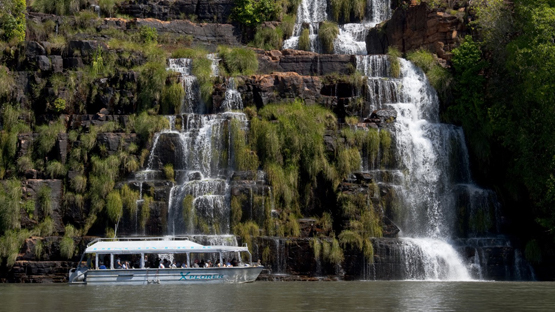 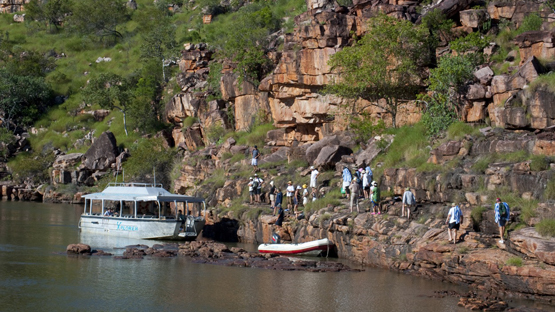 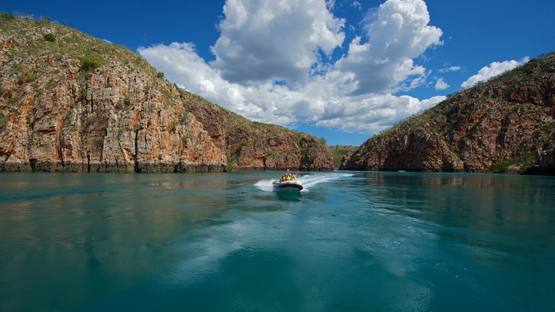 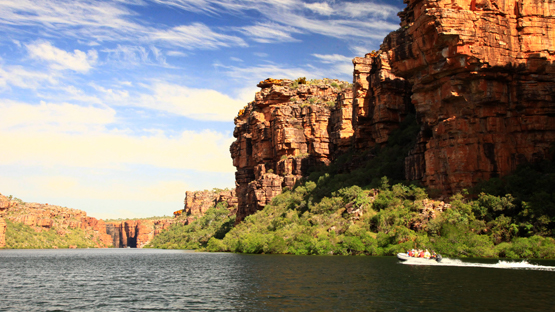 This 10-night Kimberley cruise takes you on an unforgettable journey from Broome to Darwin. Expert guides interpret 40,000-year-old rock art and retrace the history of Phillip Parker King who first charted this spectacular coastline 200 years ago. Later in the season, witness Humpback Whales on their migration north to breeding grounds along the Kimberley coast.

Board a Zodiac and touch the spray from the magnificent King George River and its towering 80-metre twin falls. Join an expert guide to learn about the history of the ancient Wandjina and Gwion Gwion rock paintings. Witness waterfalls cascading off Montgomery Reef as it rises out of the ocean on the ebbing tide, whilst discovering the reef’s diverse marine life.

The below itinerary is indicative. Alternate departures operate in either direction.

DAY 1: DEPART BROOME
Board your Coral Expeditions ship at 4.00pm where there is time to settle into your stateroom before our 5:00pm departure. Take the time to become acquainted with all the facilities onboard as we cruise northwards towards Cape Leveque. As dusk falls meet your fellow travellers, the Captain and crew for the Captain’s Welcome Drinks.

LACEPEDE ISLANDS
The Lacepede Islands are a protected class-A nature reserve and are significant as a seabird nesting rookery for brown boobies and roseate terns. Other species often sighted at the Lacepedes include Australian Pelicans, frigate birds, egrets and gulls. The four low-lying islands are also an important breeding and nesting habitat for green turtles. If weather and tide conditions are suitable, explore the lagoons by Xplorer and Zodiac tender vessels.

HORIZONTAL FALLS AND BUCCANEER ARCHIPELAGO
The Horizontal Falls are one of the Kimberley’s biggest attractions and are a result of the mammoth 11m tides the Kimberley is renowned for. Naturalist David Attenborough described the Horizontal Falls as ‘one of the greatest natural wonders of the world.’ The Horizontal Falls are created as the ocean thunders through a narrow gorge in the McLarty Ranges. Riding the rapids on our Zodiac inflatable tenders is one of the highlights of the cruise. Talbot Bay is at the heart of the Buccaneer Archipelago, where rocks on the 800 or so islands are estimated at over 2 billion years old. At Cyclone Creek, you will see evidence of massive geological forces in the impressive rock formations and cruise through the Iron Islands, past Koolan Island, before enjoying sunset drinks at Nares Point.

DOUBTFUL BAY AND RAFT POINT
Raft Point guards the entrance to Doubtful Bay, a vast body of sheltered water which harbours significant sites such as the ancient Wandjina rock art galleries, considered some of the finest in the Kimberley. If a Traditional Owner guide is available to accompany us, we will be able to visit the galleries. Doubtful Bay is the traditional country of the Worrora people who follow the Wandjina, their god, law-maker and creator. Images of Wandjina are found throughout the Kimberley, recording their stories, knowledge and culture in stone. Other sites we aim to visit in Doubtful Bay include the mighty Sale River, Steep Island and Ruby Falls at Red Cone Creek.

MONTGOMERY REEF
Montgomery Reef is a biologically diverse area covering over 400sq km and was named by Phillip Parker King. Twice daily, as the sea recedes in mammoth 11m tides, Montgomery Reef rises from the Indian Ocean in a cascade of rushing water revealing a flat-topped reef pockmarked with rockpools and rivulets. As the reef emerges, we get up close in our Xplorer and Zodiac inflatable tenders to witness the spectacle as our Expedition Team share their knowledge on the formation of the reef and the myriad wildlife. Opportunistic birds take advantage of the emerging reef, feeding on marine life left exposed in rock pools. Turtles and dolphins too are also attracted to feeding opportunities as the ocean recedes. The ocean is awash in a swirl of eddies and whirlpools as the moon’s gravitational force takes hold. Then, a few hours later the entire water-borne drama is reversed as the tide comes in and Montgomery Reef disappears below sea level.

PRINCE REGENT RIVER AND CAREENING BAY
King Cascade is a classically beautiful terraced waterfall and is one of the most photographed waterfalls in the Kimberley. Falling from a considerable height and around 50m across, water tumbles down a staggered terrace of Kimberley sandstone. Layer upon layer of the ochre-hued and blackened rock sprouts grasses, mosses and ferns in a sort of lushly vegetated hanging garden. We reach King Cascade after cruising in our Xplorer tender vessels down the Prince Regent River which is a remarkable anomaly as the river runs dead straight along a fault line. Lt. Phillip Parker King named nearby Careening Bay after he beached his leaking vessel HMC Mermaid to effect repairs. While stranded on this remote coastline for 17 days the ship’s carpenter carved HMC Mermaid 1820 into the bottle-shaped trunk of a boab tree near the beach. 200 years later, the Mermaid Boab Tree has since split into two trunks and sports a mammoth girth of 12m. Significantly, the bulbous tree is listed on the National Register of Big Trees and the carpenter’s careful inscription now stands almost as tall as a person. Learn more about the Mermaid Boab Tree.

PRINCE FREDERICK HARBOUR AND BIGGIE ISLAND
Prince Frederick Harbour is one of the Kimberley’s most spectacular locations at the southern end of York Sound. The harbour is dotted with islands lined with mangroves and monsoon rainforests, set against a backdrop of ochre-hued escarpment. White-bellied sea eagles and other birds of prey are often seen here, and at low tide, expansive mudflats reveal large populations of mudskippers and mangrove crabs. We will take our Xplorer tender vessels on a cruise up Porosus Creek to view some striking rock formations.

MITCHELL FALLS, WINYALKAN, & SWIFT BAY
Tumbling down the Mitchell Plateau in a series of tiered waterfalls and emerald green rock pools, the Mitchell Falls are the photogenic poster child for the Mitchell River National Park. Take a scenic heli flight (additional cost) to multi-tiered Mitchell Falls where emerald-hued rock pools cascade down the escarpment. Mitchell River National Park is inhabited by significant numbers of mammals, amphibians, reptiles and bird species which are lured by a year-round water source. Sandstone terraces beside tiered rock pools make a terrific viewing platform from which to savour the serenity of this ancient landscape. An alternative option to Mitchell Falls is exploring the sandstone caves of Hathway’s Hideaway. This mass of weathered tunnels, arches and columns form a labyrinth-like maze and was once an Aboriginal midden. Another option while anchored at Winyalkan Bay is a visit to a series Wandjina and Gwion Gwion rock art galleries at Swift Bay. In the evening we will enjoy watching the sunset over the Indian Ocean while indulging in a gourmet BBQ.

VANSITTART BAY
Vansittart Bay is home to many cultural and historically significant sites like the remarkable Gwion Gwion (Bradshaw) Aboriginal rock art galleries estimated to be up to 20,000 years old. Jar Island is so-named after the pot shards found here, brought to the island by Macassan fisherman harvesting sea cucumbers (also known as trepang). Nearby, on the Anjo Peninsula lays the well-preserved wreckage of a US Airforce C-53 Skytrooper aircraft, the result of a pilot losing his bearings flying from Perth to Broome in 1942 and putting down on a salt pan near present-day Truscott Airbase.

KING GEORGE RIVER AND FALLS
Fed by the King George River draining across the Gardner Plateau, 80m tall King George Falls are the most impressive Kimberley waterfalls and the highest twin falls in Western Australia. Before reaching the mist-like spray rising from the base of King George Falls, we cruise through steep-sided gorges carved by a flooded river system that carved a swathe through the Kimberley landscape 400 million years ago. Early in the waterfall season, we may cruise around the base of impressive King George Falls while in later months we take the opportunity to view the honeycomb erosion patterns of sandstone cliffs up close. As our incredible Kimberley adventure draws to a close, on our last evening aboard we enjoy the Captain’s farewell drinks amongst new-found friends.

DAY 11: ARRIVE IN DARWIN
Our incredible adventure along the Kimberley Coast concludes in Darwin this morning at 8:30am.  Bid farewell to new-found friends and the Captain and crew. Post cruise transfers to CBD hotels or the airport are included. If you’re not transferring directly to the airport why not spend the day enjoying the tropical city of Darwin with its landscaped waterfront and harbourside Wave Pool.